Smart TV allows you to watch your favorite movies that you can play them from your smartphone using LocalCast Kodi.

Kodi is one of the most popular apps for video streaming on TV. Kodi is a freeware that you must download to watch movies on TV. How to set up the LocalCast app on Kodi?  LocalCast Kodi is two different apps that you can integrate with each other.

Install and Use Kodi via LocalCast

You probably want to play videos through Kodi but you cast the video via LocalCast. LocalCast Kodi is possible because it can save your smartphone battery. For details, you can download the apps first:

Step 2: Once they are installed, and then you must download ES File Explorer and XML file PlayFactorCore.

Step 4: Connect the Kodi app to your media center first.

Step 5: After you connect it, then you can open ES Explorer and find PlayFactoryCore.xml that you have just downloaded.

Step 6: You need to copy the PlayFactoryCore.xml and go Android Data and find org.xbmc, Kodi. Then, you can open user data and just paste the file into the folder.

Step 7: Next, you can run Kodi app and go to a video that you are going to watch. Then, the Kodi app will automatically run the LocalCast app.

Step 8: When the video is loading, you will be asked to play it and then select the device that you want to stream to.

Step 9: Select “Play” once again and finally the video will show up on your TV through the Chromecast device.

Well, those are several steps to play videos on Kodi through the LocalCast app. LocalCast Kodi can be a good option if you do not want to watch video on both screens while you can lock your smartphone, but it is still connected to your smart TV.

Must Read: How to cast movies on Mobdro to Chromecast?

In fact, you also have another option to cast video on your Kodi app via LocalCast using Switch for Kodi/LocalCast app.

It is also simple and easy because you only need to download Kodi and then run for initial setup. Next, you can go on to install LocalCast. At last, you have to install Switch app and then launch the app. Finally, it is done. 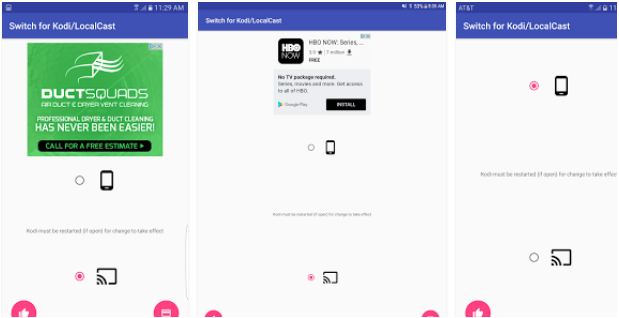 Anyway, those are several ways to watch Kodi video through a LocalCast app that you may not know. LocalCast Kodi will be a good idea because the movie will only be played on your TV while you can still use your smartphone. This integration will allow the Kodi app to play video in the background to save battery.